In a distant land many years ago, there lived a black sheep. It was executed by firing squad. A century later, the grieving flock erected an equestrian statue in honor of the slain sheep that looked very nice in the park. In the years that followed, every time a black sheep appeared, it was executed so that ordinary sheep could practice sculpture.

Augusto Monterroso in The Black Sheep and Other Fables (1969) 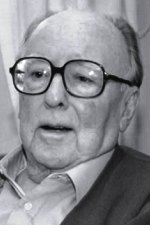