You see, the religious people — most of them — really think this planet is an experiment. That's what their beliefs come down to. Some god or other is always fixing and poking, messing around with tradesmen's wives, giving tablets on mountains, commanding you to mutilate your children, telling people what words they can say and what words they can't say, making people feel guilty about enjoying themselves, and like that. Why can't the gods leave well enough alone? All this intervention speaks of incompetence. If God didn't want Lot's wife to look back, why didn't he make her obedient, so she'd do what her husband told her? Or if he hadn't made Lot such a shithead, maybe she would've listened to him more. If God is omnipotent and omniscient, why didn't he start the universe out in the first place so it would come out the way he wants? Why's he constantly repairing and complaining? No, there's one thing the Bible makes clear: The biblical God is a sloppy manufacturer. He's not good at design, he's not good at execution. He'd be out of business if there was any competition.

The earth is a very small stage in a vast cosmic arena. Think of the rivers of blood spilled by all those generals and emperors so that in glory and in triumph they could become the momentary masters of a fraction of a dot. Think of the endless cruelties visited by the inhabitants of one corner of the dot on scarcely distinguishable inhabitants of some other corner of the dot. How frequent their misunderstandings, how eager they are to kill one another, how fervent their hatreds. Our posturings, our imagined self-importance, the delusion that we have some privileged position in the universe, are challenged by this point of pale light. Our planet is a lonely speck in the great enveloping cosmic dark. In our obscurity -- in all this vastness -- there is no hint that help will come from elsewhere to save us from ourselves. It is up to us. It's been said that astronomy is a humbling, and I might add, a character-building experience. To my mind, there is perhaps no better demonstration of the folly of human conceits than this distant image of our tiny world. To me, it underscores our responsibility to deal more kindly and compassionately with one another and to preserve and cherish that pale blue dot, the only home we've ever known.

We are star stuff, which has taken its destiny into its own hands. The loom of time and space works the most astonishing transformations of matter. Our own planet is only a tiny part of the vast cosmic tapestry, a starry fabric of worlds yet untold. Those worlds in space are as countless as all the grains of sand on all the beaches of the earth. Each of those worlds is as real as ours. In every one of them there’s a succession of incidents, events, occurrences, which influence its future. Countless worlds, numberless moments, an immensity of space and time, and our small planet at this moment — here we face a critical branch point in history. What we do with our world, right now will propagate down through the centuries and powerfully affect the destiny of our descendants. It is well within our power to destroy our civilization and perhaps our species as well. If we capitulate a superstition or greed or stupidity, we can plunge our world into a darkness deeper than the time between the collapse of classical civilization and the Italian Renaissance. But we are also capable of using our compassion and our intelligence, our technology and our wealth, to make an abundant and meaningful life for every inhabitant of this planet, to enhance enormously our understanding of the universe and to carry us to the stars. 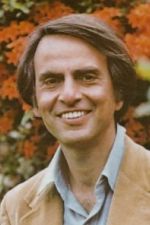