One thing only is needful: the knowledge of the simple and clear truth which finds place in every soul that is not stupefied by religious and scientific superstitions — the truth that for our life one law is valid — the law of love, which brings the highest happiness to every individual as well as to all mankind. Free your minds from those overgrown, mountainous imbecilities which hinder your recognition of it, and at once the truth will emerge from amid the pseudo-religious nonsense that has been smothering it: the indubitable, eternal truth inherent in man, which is one and the same in all the great religions of the world. It will in due time emerge and make its way to general recognition, and the nonsense that has obscured it will disappear of itself, and with it will go the evil from which humanity now suffers. 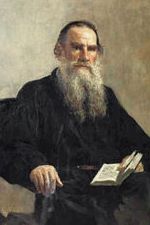